Happy New Year! I am Chairman Takashi Imai of the Japan Atomic Industrial Forum (JAIF). Last year we were forced to forego the New Year’s gathering because of the COVID-19 pandemic, so I am very glad to be able to hold the event this year, though in a somewhat different style from the past. 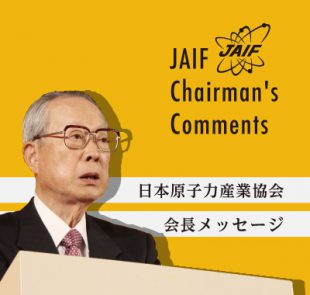 As always, at the beginning of another year, I would like to share some thoughts on nuclear power. Last year saw the holding of COP26 in Glasgow. Now that confronting the reality of global warming has become a top international priority, activities are intensifying toward reducing greenhouse gas emissions, primarily among technologically advanced countries. At the same time, China and India are emphasizing their positions as developing nations, and clearly intend to push back the goal of carbon neutrality by one or two decades. If they continue using cheap coal in the manner that they do, not only will progress on emissions reductions stagnate at best, but also other advanced nations making the effort, with higher costs, will not remain competitive. Thinking that a market economy should present the same opportunities to all, we will have to discuss this situation more in the future.

It is very important to control global warming. However, for the Japanese economy to grow sustainably, it is essential that energy policy be planned realistically, taking into consideration economic effects, supply stability, and more. In order to realize a low-carbon society and economic development simultaneously in a resource-poor country such as Japan, one of the most rational actions is to make maximum use nuclear energy—clean and stable in terms of generation costs.

Alas, turning an eye to Japan’s energy policy itself, the policy on use of nuclear energy remains unclear.

Last year, at the initiative of the government, reduction targets were substantially revised for greenhouse gas emissions by 2030, with the previous target of reducing emissions by 26% from the 2013 level raised to 46%, in a single jump.

Japan’s 6th Strategic Energy Plan, approved by the Cabinet last October, was issued based on the new figure, which itself represents an extremely high hurdle. Scenarios to clear it are very tough. In particular, industries and households, in their uses of electricity, are both required to reduce usage by some 20%. In the supply aspect, the use of renewable energies is to be expanded to the maximum. However, there are scant opportunities to expand renewable energies in Japan, because the country is very mountainous and usable flat areas are small. Shallow sea areas suitable for wind power are also limited.

Given those realities, the importance of nuclear power—which does not emit greenhouse gases and is a stable source of electricity—becomes that much greater. In Europe, both from a supply stability point of view and toward the realization of a low-carbon society, movements are advancing toward the use of nuclear energy, with the exception of Germany and Austria. In Japan’s Sixth Strategic Energy Plan, however, it is stated that the country is “reducing dependency on nuclear power as much as possible,” without any mention of the construction of new or replacement reactors.

We at JAIF will continue working to build recognition—among the public nationally and relevant organizations—of the true value of nuclear energy, and to have its future utilization clearly stated in Japan’s energy policy.

For the effective use of nuclear power, it is also very important to establish the nuclear fuel cycle as soon as possible and proceed steadily with the project to dispose of high-level radioactive waste (HLW). Japan’s Ministry of Economy, Trade and Industry (METI) appears ready to start a system next year for granting subsidies to municipalities that newly agree to power generation with uranium-plutonium mixed oxide (MOX) fuel. The effective use of plutonium is also important, as it represents a form of renewable energy. The removal of plutonium from spent fuel allows nuclear waste to be treated more easily, and enables the plutonium to be mixed with standard fuel for MOX-fueled generation. At the same time, holding “surplus plutonium” is an issue that has drawn the attention of other countries. At present, there are only four reactors in Japan using MOX fuel. I ask the power companies to use it in as many plants as possible.

Nuclear power should also be positioned as a useful option for continued power generation in the future through the development of advanced technology. There is consideration in the United States of constructing fast reactors using public and private funds, and the mass media has reported that the parties want to utilize the technology of Japan, which has experience with its own prototype fast breeder reactor (FBR) “Monju.” Technological development of next-generation advanced reactors, small module reactors (SMRs), etc., should not be delayed. I want the public sector, industry and academia to integrate their efforts through international cooperation. Such projects would be attractive, drawing the attention of good, talented people in the field. I want the industry to act in a concerted fashion to attract, educate and ensure valuable human resources through the pursuit of nuclear innovation.

To those ends, we at JAIF are determined to continue our work on behalf of the entire nuclear industry, with the support of our members and all of you here today.

Finally, I close my New Year’s greeting with our promise of further and utmost efforts in activities to promote decommissioning in Fukushima and support the reconstruction of the prefecture, as well as to communicate the importance of nuclear energy to regions and the people, along with ensuring and fostering human resources toward the revitalization of the nuclear industry, and promoting international cooperation.

Thank you for your attention.
(The speach at New Year’s gathering held on January 6, 2022)