At a regular meeting on October 7, the Nuclear Regulation Authority of Japan (NRA) approved a draft review report for the MOX Fuel Fabrication Plant, owned by Japan Nuclear Fuel Ltd. (JNFL), which is located in Rokkasho Village, Aomori Prefecture. The report—which concluded that the facility was compatible with Japan’s new regulatory standards—will be finalized after being referred to the Ministry of Economy, Trade and Industry (METI) and made open to the public for comments. 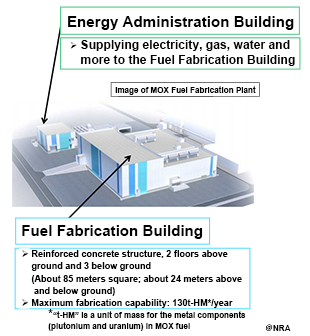 In January 2014, an application for examination of the plant for compatibility with the new regulatory standards was filed, together with one for the Rokkasho Reprocessing Plant. Permission was given to JNFL on July 29 to alter the installation of the reprocessing plant.

On the matter of severe accidents, possibilities were examined for criticality accidents and loss of function accidents (namely, the ability to confine nuclear fuel substances and so forth). As for criticality accidents, JNFL’s evaluations and measures (prescribed responses by operators and more) were confirmed to be appropriate, to the effect that “no criticality would occur even if MOX powder were delivered multiple times mistakenly beyond technical assumptions.”

A press conference was held after the meeting, at which NRA Chairman Toyoshi Fuketa referred to the progress made in the examinations for a series of nuclear fuel cycle facilities including the reprocessing plant when he said, “There is a higher mountain yet to climb” on the road to getting permission for facilities required to administer and operate those major facilities, in light of the characteristics and potential risks of such facilities in comparison with nuclear power plants (NPPs). Still required, for example, is the approval of construction work plans (detailed design approvals).

As for the MOX fuel itself, he said that domestic fuel was advantageous from a technological point of view, that is, it would be “convenient to burn it immediately after production.” JNFL expects to complete the plant in the first half of FY22 (April 2021 to March 2022).

At the same meeting on October 7, the NRA also approved a decommissioning plan for the Ikata-2, owned by the Shikoku Electric Power Co.. The decommissioning period, expected to run until FY59, is divided into four stages. Permission was given this time for the first stage, involving preparation for dismantling.